Now, we turn to a new inscription, first published by Benjamin Sass as Sinai 380 (Sass 1988, 40; and Fig. 99, 100 [Mine G], 103-5 [inscription]). His two photgraphs, taken at different times of day, are not clear, except to clairvoyants. Émile Puech (2002, plates 2 and 3, reproduced below, numbering the inscription 387) offers a better photograph, and a copy of a squeeze (estampage). My drawing attempts to find the main details, but Puech says that I have overlooked a number of letters; his drawing (on his Fig. 1.2) has twice as many as mine. Considerable guesswork is required to recreate the whole text, but here is its context. This inscription is above the entrance to Mine G, and a collection of metallurgical equipment was found on the roof of the mine, near the writing. Thus it would not be surprising to find metal-melting mentioned in the text. 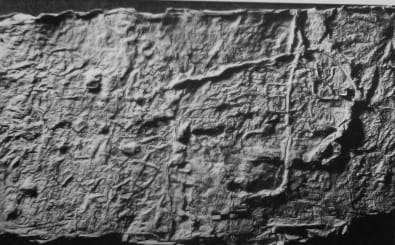 My view of the letters sees two lines: one runs from right to left, the other from top to bottom. If we start with the letters on the far right, we can see 'aleph (ox) and Hh. A word that would fit neatly into this setting is 'ah., 'brazier' (as in Jeremiah 36:22-23, "the fire of the brazier"); it is said to be a loanword from Egyptian, which also fits into the general scenario of West Asians working for the Pharaoh.

Below the 'brazier', running in the same direction, is the word B`LT, 'the Lady'. Putting these two sequences together we have "Brazier of Ba`alat". If there is a Dh ( = ) to the left of the Hh, then this would strengthen the connection between the two words, affirming that the brazier belongs to Ba`alat, and therefore it should not be touched. This would serve the same purpose as the cautionary expression "beloved of Ba`alat" found in the other inscriptions under consideration here. Émile Puech claims that M'HB`LT runs from left to right along the bottom. but this is hard to find (note that the estampage has 3 centimetres missing from that section of the rock).

From what we have seen in the previous four inscriptions, which mention a 'melt-furnace' (351, 353, 360, 361), my expectation is that the vertical column of signs will say KBShNMSh. Certainly, to the left of the T we can find the snake for N and and below it the wave-sign (with three peaks) for M. Above the N is the other snake-sign, Sh, representing the serpent on the sun; another Sh is not really discernible below the M, but the stone may have been worn away by weather here. Above the Sh of -ShNM[Sh] the photograph seems to show a snake (N), not a house (B); but there are sufficient lines at this point to construct a box. Above this is a round character, which might be a fish (with no fins), hence Samek; but if it is K it would be a hand, and this one would be showing its palm.
Powered by