Turning now to a pair of related inscriptions, which apparently have the KBShN MSh sequence: 361 (on the right side of the photograph, left side of the drawing) was engraved on the rock face near the entrance to Mine N; 360 was on a stone slab near Mine K, and close to 367 (the stone marking the water reservoir). Inscription 361 is clearer, so we will examine it first. I know the picture is murky, but a magnifying glass helps with all the photographs I provide (most are from Butin's publications). On the left (not shown on the drawing) is a large letter that could be K (hand with fingers), followed by B (a square house), Sh (the sun-serpent), and N (snake, below Sh). This gives us KBShN, and there is possibly M[Sh] down below K. 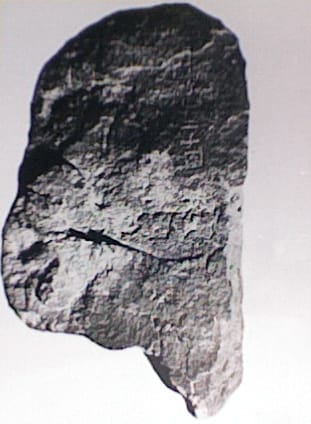 On the right hand side of the stela (360), focusing on the letters in the middle of the column of writing, we can find (with patience and persistence, on better reproductions than I have provided here) BShNMSh, preceded by a simple T [+], Dh [=], and a sign that is commonly transcribed as T, but we know it must be K! I suspect that the same scribe has engraved both inscriptions (360, 361), and I wish he had written more words, to help us to distinguish his T and K. My suggestion is that we are looking at a simplified hand with its middle digit and little finger pointing to the left, and the thumb pointing upward. So we have KBShN MSh, 'melt furnace', but the expected MHB B`LT is not obvious (there is a possible B to the left of MSh), but the stone has suffered severe weather-damage (and exposure to the water of the reservoir?).

At the top of the column (with comparative assistance from 361), we detect Dh, Sh, Hh, 'alep (ox-head, slightly indistinct), T, Z, and then KBShN MSh.

Regarding the Hh (H.), we have already encountered this letter in the bottom left corner of 353 (see the photograph above). There it was a square house with a round courtyard; here it is comprised of two squares, the upper one of these being divided into two; on 361 the corresponding letter (standing out clearly above a large square B) has the bisected square at the bottom. All three represent a stylish mansion, as distinct from a simple house, and the word hhassir (or h.z.r, court, mansion) provides the sound Hh. Another example is found on the rock at Mine G (see 380, below); it has the shape H), that is, two rooms and a semicircular courtyard. It is obviously the character that became Roman H, by the loss of some of its walls, but people will try to tell you that it is a form of B (house), even when there is a clear square B below it (as on all three of these inscriptions).

The combination ShHh produces a word known in Hebrew and Aramaic, meaning 'pit' or 'ditch', from the root sh-w-hh, 'sink down'. This presumably refers to the mine in each case: 361 was at the entrance of Mine N, and 360 would relate to Mine K (though it was found 150 metres from the mine).

The next word 't could be: 'you' ('thou'); 'a sign' (even meaning a letter of the alphabet); 'he came'; or 'together with'. If we can allow Dh (dhu) to function as a demonstrative adjective, giving 'this pit', rather than as a pronoun, saying 'this (is) a pit', then we get this result: 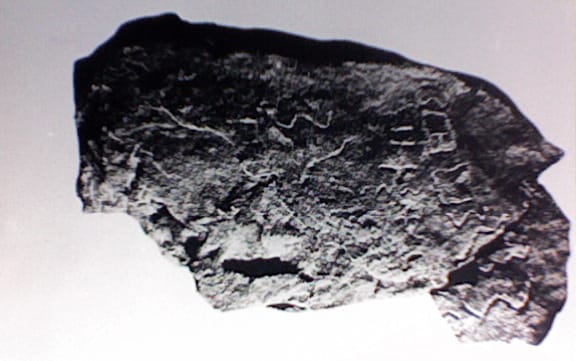 We find much the same on the right hand side of 361. It commences with Dh ShHh, 'this pit', but the K is missing for the -BShN MSh, which is all quite clear on the photograph. Those who constantly seek 'the serpent lady' (DhT BThN, 'the one of the serpent') find the missing DhT to the left of HhB. But is it T or K? To make it K we can invoke a faint line pointing NW, which Gordon Hamilton (2006, 361) includes in his drawing (but is merely a smudge on the reproduction above, as is the stroke needed to complete the T [+]). Again I will plump for a stylized hand (not a cross) with a wrist, two fingers, and a thumb.

There is space above the Dh for ' T, as on 360, but it is not visible; there are possible horns of the ox, and also perhaps a P (mouth) above Dh, which could supply pa, 'and'. Beneath the K we can see MH, the beginning of the familiar formula, but a piece of the text has been lost.

My reading would thus be:
"This pit (and) this melt-furnace are beloved of Ba`alat".
Powered by